It was early and the sun was still low when I started picking alpaquinoa. The thick-stalked plants are usually treated as weeds, but the leaves make a delicious addition to salads. Luis, the farm manager, instructed me to pluck off the leaves one by one so they could be put into bags and included in the farm’s weekly offerings. The leaves I picked accumulated slowly in the perforated plastic box until I finally had enough to bring back to the shed where other volunteers were weighing, washing and packing vegetables. My next task was harvesting mostaza, a lacy-leafed vegetable with a surprisingly sweet flavor. I wandered the rows in search of pockets of mostaza, making sure to sample the vegetables as I picked. Since I was harvesting the whole stalk, the leaves accumulated more quickly and soon my basket was again full. Once I weighed the contents of the box and handed the vegetables over to the other volunteers, I was onto the next task: pulling up carrots. 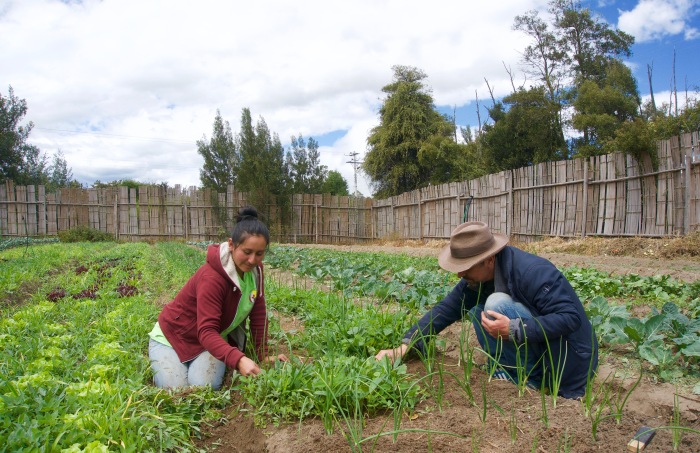 As part of my global health summer research, I worked on the Cinca farm in the Ecuadorian highlands. The Cinca farm is committed to growing produce without the use of pesticides or chemicals and relies on volunteers to keep the weeds in check. The farm produces weekly vegetable boxes that are sold locally and in Quito. I’ve purchased a few boxes myself, and I can say these veggies are as fresh and tasty as they come. 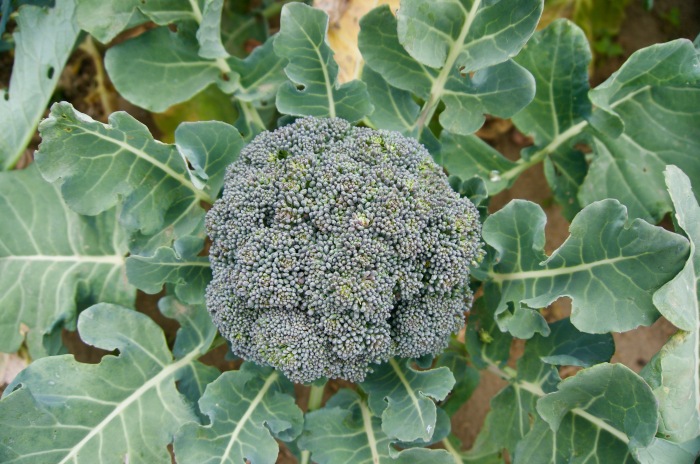 Cinca grows more than just vegetables, it’s an outdoor classroom that offers the possibility for local people to relearn how to grow food sustainably. Cinca was founded by members of the local community as a model to reintroduce organic farming practices in a region that has been hugely impacted by industrial agriculture.

Ecuador produces more commercial roses than any other country in the world, and Pedro Moncayo is one of the major centers of production (Soper, 2013). Throughout the county, flowers (predominantly roses) are grown in greenhouses that cover the hillsides. When I asked a security guard for a tour at the gated entrance of one greenhouse complex, I was turned away. Even though I wasn’t allowed inside, it’s clear from the people I talked to and the literature that the greenhouses are pesticide hotboxes. Pesticides are used extensively in the Ecuadorian flower industry, and organophosphates are among the most commonly used insecticides (J. R. Suarez-Lopez et al., 2013). A growing body of evidence points to the effects of chronic, long-term pesticide exposure in areas of high agricultural and floricultural production. People living in communities surrounding the rose plantations in Pedro Moncayo County have positive biomarkers for pesticide exposure (J.R. Suarez-Lopez et al., 2018).  And increased pesticide exposure is linked with negative health effects.

One of the employees at Cinca, a young woman named Margot, told me that her sister worked in one of the floricolas and became very sick after several years. The doctor told her that she had una enferma de sangre—a sickness of the blood, and that she needed to stop working at the rose plantation. The sister stopped working for some time and felt better. But without other economic opportunities she had no choice but to go back to work at the flower plantation. This story was not uncommon. The more people I spoke to, the more I heard some variation of this story: health problems following years of floriculture work. The study I’m working on this summer is investigating a range of possible health effects of pesticide exposure among people in Pedro Moncayo County.

When I’m not pulling weeds at Cinca, I am analyzing a data set from the ESPINA study. The ESPINA study is a longitudinal study that analyzes links between pesticide exposure and children’s health and cognitive development. The study participants are children from Pedro Moncayo county, many of whom are children of floriculture workers. Findings from the ESPINA study have shown that children with positive biomarkers for pesticide exposure experienced neurobehavioral delays in areas of attention, memory and impulse control following periods of high spraying (J. R. Suarez-Lopez et al., 2017).  For my research, I am analyzing possible links between pesticide exposure, as measured by acetylcholinesterase activity, and thyroid hormone levels. The current body of literature is inconclusive, but there is some evidence that pesticides act as endocrine disruptors by binding to hormone receptors and altering reproductive, metabolic, and thyroid hormone balance.  There is quite a bit of evidence showing that pesticide exposures alter reproductive functioning and negatively impact fetal and neonatal growth. I was more surprised by a few articles I found showing a link between pesticide metabolite levels in blood and urine and diabetes risk (Neel & Sargis, 2011). While definitive data showing causation is still lacking, it seems clear that pesticides alter normal human physiology, just as they interrupt normal physiology in the pests they are designed to kill. 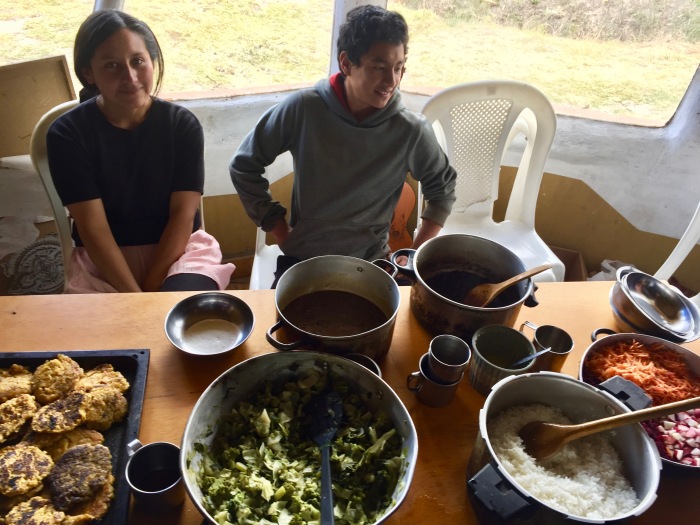 Volunteers and employees prepare and eat lunch together every day

Back at Cinca, Margot explained to me that the farm is meant to show people how they can grow their own food. She told me that many local people have stopped producing food as they have transitioned from an agrarian livelihood to a cash economy. Work in the flower plantations pay people about twenty dollars a day, barely enough to survive. Not only are they exposed to high concentrations of pesticides, but they also have little choice but to buy cheap, processed food with the little money they earn. Margot hopes that the farm can teach people to grow some of their own food and offer a fresh food source for the community. If people grew more of their own food, she wonders if they could work fewer hours in the greenhouses and have a more healthful diet. The Cinca farm will not fix all of the challenges faced in Pedro Moncayo county, but it provides a model for tackling challenges at the intersection of human health and the environment. As an outsider, I am weary of making claims about what people should do, but the fact that Cinca was started by people in the local community makes me trust that it could be a vehicle for change.

Lettuce at the farm